The Friends of Modern Art (FOMA) film series is made possible through support from membership in the FIA Film Society, beginning its eighth year. We invite you to support our great 2022–23 film series by joining today.

For more information, contact the Membership office at 810.234.1695 or email Valarie Bailie. 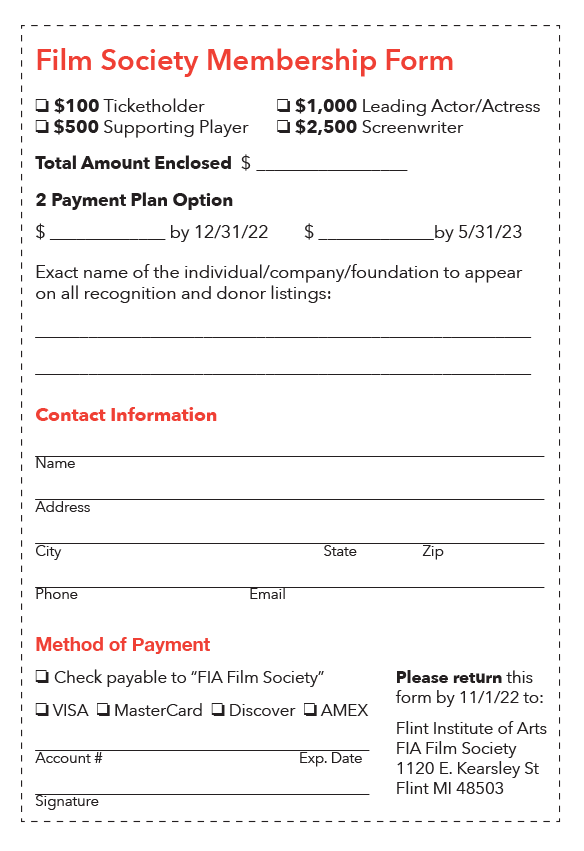 Sponsorship does not include films during the Flint Jewish Film Festival, and Arabic Film Series.

Become part of the Film Society Legacy at the Flint Institute of Arts.

A decade ago the FIA established the Film Society. Membership in the Society not only supports the Film Program, but it also offers its members reduced film tickets prices, an informative newsletter, pre-screenings, as well as recognition of support.

Recently, one of the founding members of the Society, Flint cinephile Linda Pylypiw, notified the FIA that she was establishing a planned gift from her estate to benefit the program. This discussion has led to the formation of the FIA Film Society Legacy Fund (FSLF). This endowment will help sustain the Film Program in perpetuity. Linda is giving a lead gift to start the Fund and, in the future when her bequest is realized, it will be added to the FSLF.

If you are a member of the Film Society or just love films and want to help ensure that the film program continues, please consider a contribution to the Film Society Legacy Fund. As the FSLF grows it will yield dollars to sustain the affiliated costs of equipment and Theater maintenance, personnel, security, and ensure that the FIA will always be the place to see great classics, foreign, alternative, and independent films. Your contribution is 100% tax-deductible.